Cris is an expert when it comes to providing swimming lessons and private tuition for all ages and abilities in Abu Dhabi. Whether you have some experience or are a complete beginner he can help. 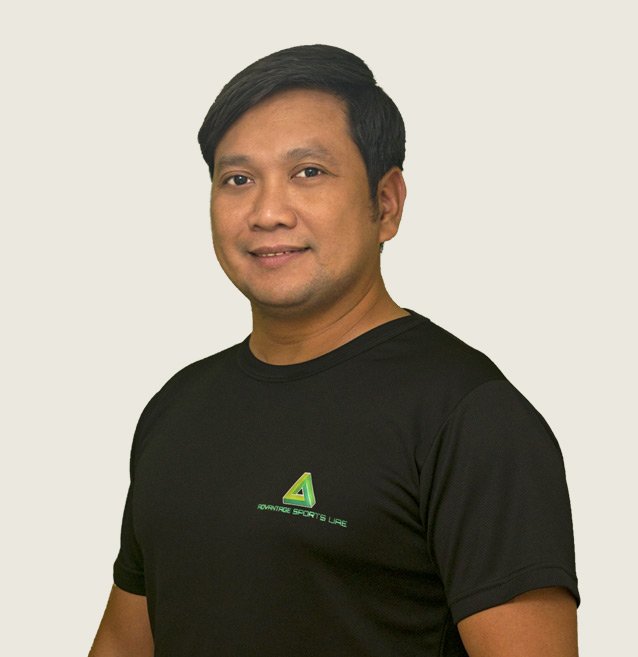 If you are looking for a male Swim Coach in Abu Dhabi, Cris can provide you with well-structured Swimming Lessons including Aqua Baby, Learn to Swim and Stroke Correction for Children & Adults. Cris has a wonderful balance of experience and qualifications over the last 10 years in his coaching and professional competing.

Cris is located on island in Abu Dhabi City but is also available for one to one private sessions at various locations throughout Abu Dhabi subject to availability – this can include swimming lessons for adults or children at home.

As a former competitive swimmer, Cris is proficient in all four competitive strokes and race techniques. He also specializes in Learn to Swim (for all ages and abilities), Stroke Correction, Technique Development, Squad Training, Adult Beginner and Swim Fitness.

Cris’ fun, friendly, safe, and patient approach to students cater a relaxed ambiance which is paramount to learning process and skill development in Abu Dhabi. Cris is glad teach you whether you are a beginner and keen to learn how to swim, to improve technique and endurance, or to advance to compete in higher level.

How Can Cris Help You?

Cris hails from Lucena City in the Philippines and was competitive swimmer when he was younger. He was a member of men’s varsity swimming team during his college playing years.

Cris is a fully qualified Swimming Coach Instructor with broad experience in the Philippines and here in the U.A.E. Cris specializes in Learn to Swim, Stroke Correction, Squad Training, and Adult Lessons. As a competitive swimmer, Cris is trained in all four competitive strokes and skills aiding the development of swimmers to competitive level.

Apart from being a Swim Coach, Cris is an artist and a talented musician. He also worked as a pianist/keyboardist and had been to Japan and Malaysia to play music. As an artist, Cris also has an interest and passionate in learning photography.

He aims to create a fun, safe, and relaxed environment for his students to raise and maximize the progress of each session and develop swimmers’ skills and technique. He believes that anyone can learn how to swim and deserves a chance to see where swimming can take and benefit them and his job is to help them discover that.

Now that he is no longer competing, Cris likes passing his knowledge and skills to his students and helping them to create the best experience in swimming. His ability to build rapport and strong relationships with his swimmers and creating a fun and friendly atmosphere gained him a reputation among his students.

He is pleased nothing more than to see his students’ progress and development to the best of their potential and abilities.

How Many Lessons Will I Need?

This depends on whether you are completely new to swimming or want to improve on your current skills. Have a chat with Cris for more information.

Where Can I Take My Lessons?

At home, or other suitable locations in Abu Dhabi.

What Ages Can You Teach?

Cris is qualified to provide 1-2-1 and group coaching for all ages and abilities.

Do You Offer Discount Packages?

Please use the contact form below to get in touch with the trainer.

Private & Group Swimming Lessons Coach In Abu Dhabi – Cris
Thursday, August 27, 2020
★★★★★
“ My daughter learned so much from her lessons with Coach Chris at Advantage Sports UAE. She loved going to the lessons. He is amazing. Highly recommend”
– Mira from Abu Dhabi

Increased Confidence In The Water

Private & Group Swimming Lessons Coach In Abu Dhabi – Cris
Monday, July 27, 2020
★★★★★
“ I would highly recommend Advantage Sports. We have been using them for some time now to help our children to progress with their swim. Advantage Sports provided us with the swimming coach Crisanto and he has been excellent. My children immediately took to Crisanto who is professional, friendly and knows how to deal with children in a friendly manner. Through Crisanto both of my children found confidence in the water and they have thrived with their swimming skills.”
– Darren
Add Your Review - Click Here

Confused by reps and sets? Is one more important than the other? We asked a PT in Abu Dhabi for his thoughts and guidance on whether reps or sets are more important as part of your muscle building training regime. 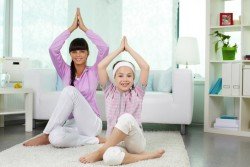 Yoga in the UAE has so many health and lifestyle benefits. Yoga is perfect for your kids to do too. Whether as a fun class or as part of family fitness. 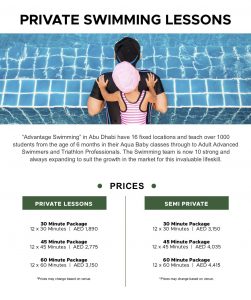 2021 Swimming lesson packages in Abu Dhabi. Get a great deal on private and semi-private swimming tuition. Available at 16 different locations in Abu Dhabi with a professional male or female coach. Babies, children, adults and seniors. 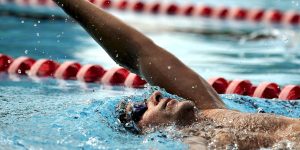 If you want to get fit using swimming as a fitness tool these adult lessons in Abu Dhabi are ideal for you. Held at the Abu Dhabi Golf Club these swim fit classes are provided with a professional swimming coach to help you get fit faster and lose weight.